Looking Beyond Pregnant Workers and New Mothers with Women’s Health 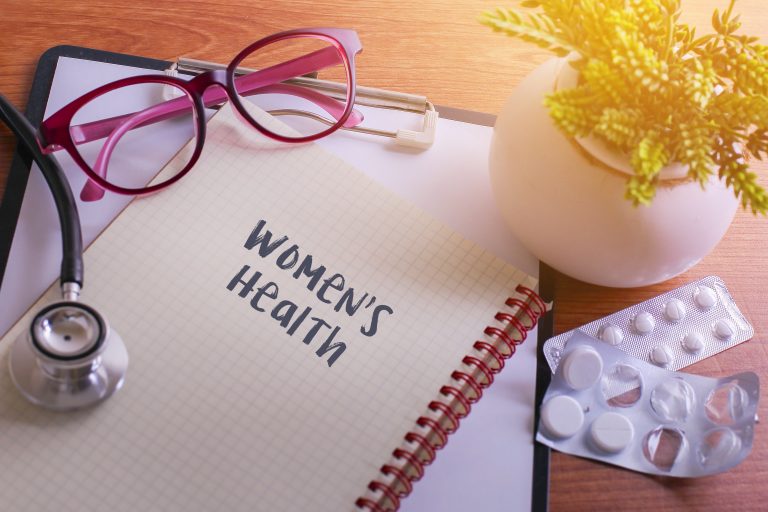 The issue of women’s health in the workplace often conjures up thoughts around pregnant workers, new mothers and the usual risk assessment. Thereafter there is the debate about maternity leave, the treatment of women returning to work after giving birth and how they can use keep in touch days to make sure they aren’t replaced or forgotten.

What are workplaces missing when it comes to women’s health and how can they begin moving in the right direction?

How does women’s health impact the workplace?

Around 11 million women have taken long-term health breaks during their working lives, and 3 million have left their workplace due to female health issues. From menstruation to postnatal depression, women’s health issues affect them in the workplace, and when left unaddressed, have a negative impact on both them and the business. As an example, almost a third of women have taken sick leave due to menopausal symptoms such as hot flushes, brain fog, anxiety, fatigue, and migraines – yet only 25% told their manager the real reason why (Supporting women in the workplace 2017).

The reason it is so essential to broaden the discussion around women’s health beyond pregnant workers and new mothers is because nearly all women will experience female health issues at some point in their lives, most of which aren’t covered in workplace policy and general awareness the way pregnancy/maternity leave is. This requires a level of understanding, compassion, and knowledge from business leaders, senior members of staff and HR. In the same way that we know someone who has a cold should look after themselves, we should also know that a woman experiencing brain fog and fatigue should be able to look after themselves as well – it begins with normalising the discussion around women’s health.

Though well intentioned, women’s health-specific policies such as menopause leave may give the impression of a tick box rather than openly addressing it. This includes the way in which women’s health is communicated. When women’s health is discussed in the workplace, it can often be directed only at women, even though men may want and also need to understand more about women’s health issues.

Unlike with maternity leave and new mothers returning to work, the knowledge that the workplace has around issues such as endometriosis, menopause, postnatal depression, and perimenopausal anxiety is minimal unless open discussions start to happen. There is also the link to wider discussions around mental health, which can be an area of overlap with women’s health, including for example post-natal depression, menopause, miscarriage and the chronic long-term conditions such as endometriosis causing pain and distress.

Alongside this, stress, anxiety and depression are cited as the common conditions reported by women in the workplace, with contributors to these conditions including caring responsibilities, ageism and sexist perceptions in the workplace. Research has also indicated that unsympathetic colleagues and managers can prevent women from talking about the difficulties they are facing or getting support from colleagues (Ageing better). 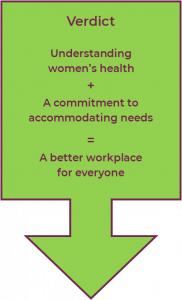 Effective workplace change relies on providing employers/managers with the tools and knowledge to support individuals and providing a psychological safe environment for employees to raise issues with their employer/managers. The starting point has to be a commitment and desire to support the health of employees, with a willingness to be open and supportive.

Discussion opens the door to understanding and making adjustments that individual women may need such as flexible working structures, hybrid working models, mental health support, as well as physical workspace changes such as better ventilation and quiet workspaces. Matching these to the individual is made possible through clear and open discussions and referrals to OH for bespoke advice if needed.

Such changes aren’t just beneficial to one demographic of the workforce. They create an open and supportive culture which then creates a psychologically safe environment leading to reduced absenteeism and presenteeism. An informed workforce can reduce work-related stress caused by a lack of understanding and poorer work relationships.

Support can also make a huge impact on how women can work and how comfortable they feel about their health, which in turn promotes a more inclusive environment.  With women making up such a large percentage of the workforce (Women in the Workforce), attracting and retaining women needs a more inclusive culture and OH is an area of expertise that can support this.