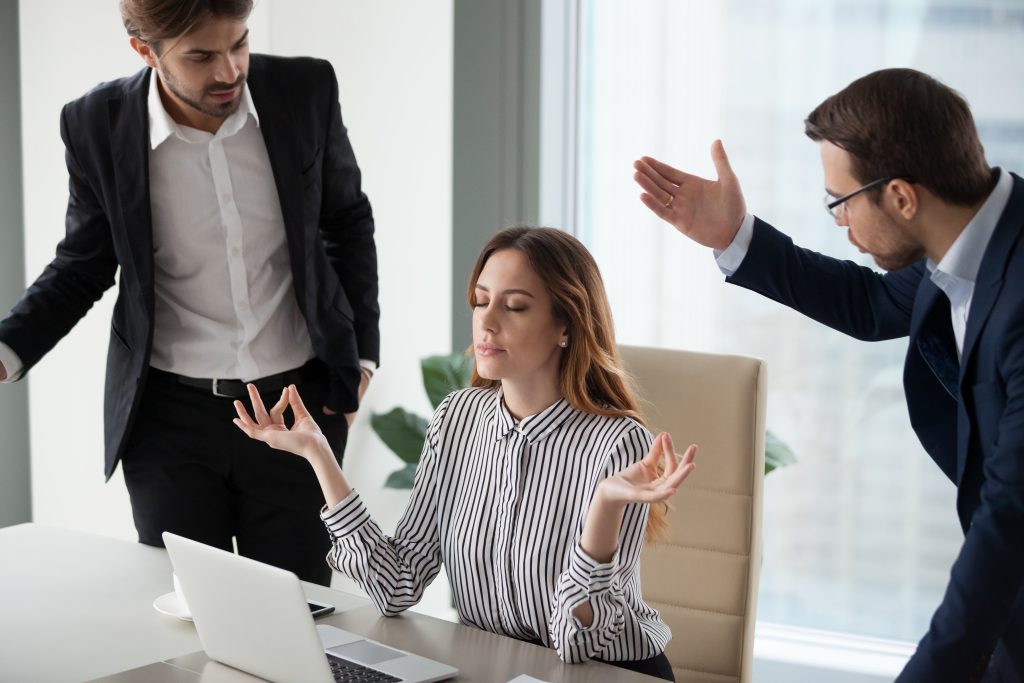 Did you know that women employed in traditionally male -dominated occupations such as medicine have higher rates of suicide than other employed women?1

Well, undoubtedly there have been significant changes in workplace culture and general employment conditions for women over the last few decades.

Yet even with these changes, sexism still prevails in some workplaces, to the detriment of women.

Many workplaces have attempted to tackle such issues by focusing on overt sexism, such as comments made by colleagues, little emphasis, however, has been put on the innate sexism that is embedded into some organisations that ranges from maternity leave discrimination to sexist jokes – specifically when it comes to male-dominated industries – which is inevitably bad news for women’s health.

Women working in male-dominated spaces are suffering from levels of stress that are harmful to their health, due to a complex range of factors such as social isolation, sexual harassment, and low levels of support from co-workers2.

Elevated cortisol levels are associated with hypertension, diabetes, heightened risk of infections and depression, amongst other health conditions, and are not anything to be taken lightly.

Is sexism embedded in male-dominated workplaces?

How many times have women been unofficially assigned extra responsibilities relating to care giving, simply because they are women?

From emotional labour to cleaning and acting as the ‘workplace mother’, women are often expected to fulfil extra responsibilities (unpaid) that merely reinforce the idea that they are around to fit a stereotype that benefits male colleagues.

This is all encouraged by gender expectations that push the concept of traditional gender roles into higher importance, from dress codes down to personality and communication style.

Perhaps the argument could be made that the emphasis on other aspects of gender disparity have allowed women’s health to take lesser priority in comparison to other aspects of employment, such as the gender pay gap.

Regardless, workplace sexism can contribute negatively to women’s health in male-dominated industries no matter which form it takes.

It’s not all bad news, though.

The rise in women’s representation

Part of this shift is due to women in the UK being 38% more likely to go to university than men, with more women on degree courses than men.

With education being such an empowering force for women, the drive that it provides towards pursuing ambitions in male-dominated fields is considerable.

Plus, since the early 2000s, women have become more qualified than men, as educational qualifications for women continue to increase faster than men’s.

With more women entering male dominated industries, the door opens for other women who may have been initially dissuaded by majority male workplace cultures, and may have had reservations about pursuing careers in certain sectors.

Still, change isn’t as fast-moving as many of us may have hoped for, in many cases, due to a reluctance within specific industries to have open discussions about the cultures that may be driving away female employees.

What needs to change?

Sadly, it’s true that many women do leave the workforce due to family obligations.

The main contributor to this is a workplace culture that is inflexible towards a work-life balance, meaning that women feel unable to continue their personal obligations alongside their work obligations – 69% women say they feel pressured by society to put family ahead of career4.

If women feel shamed for taking time off or trying to juggle work and home life, it is inevitable that they will leave the workforce. Women ages 25 to 44 are three times as likely as men to be not working due to childcare demands5 .

This lack of support and progression can be prevalent across male-dominated industries, such as engineering, with 40% of women who gain engineering degrees eventually deciding to leave the profession6 .

Primarily, this emphasises that even with adequate qualifications, women still feel as though they cannot thrive or work effectively in male-dominated industries – it all begins with workplace culture.

Merely putting an emphasis on employing more women into a specific field isn’t going to combat the issue if the women will have a reluctance to stay anyway. There’s little point in having women-centred recruitment practices or targets if the culture means they don’t stay.

An entrenched masculine culture, or a culture of stereotyping and inflexibility, needs to be addressed before focusing on recruitment strategies, otherwise it simply becomes a case of not seeing the forest for the trees.

Here are a few key areas to focus on when attempting to make male dominated industries better for women:

Change doesn’t occur overnight because it requires intention, consistency, and top-to-bottom organisational change matched with a willingness to change.

Making these changes shouldn’t be viewed as tokenistic gestures or box ticking, but instead, something that benefits all employees, across all industries.

2. Stress at work: How working in a male dominated environment can impact women’s health

4. Women in the Workplace Report

6. How to help women sustain careers in male-dominated spaces