Importance of Ethnicity in lung function

We define ethnicity as context-specific, meaning the environment we grow up in has distinct unique physical, social, cultural, economic, and historical circumstances that result in different courses of development in populations. It can be viewed as a multifactorial social construct that is tied to race and used both to differentiate between diverse populations and used to establish a personal or group identity. Classifications should not be interpreted as being scientific or anthropological (the study of humankind), however these classifications are widely used in life and other medical sectors where ethnicity may be essential. Categorizing subjects into ethnic groups is done on the assumption that ethnicity is a substitute for genetic relatedness of a population, but it does not account for genetic variation.

How was ethnicity in lung function viewed in the past?

In the 18th and early 19th century, statisticians and scientists believed that white people were at the top of the hierarchy and social order and “minority” racial groups were both biologically inferior and barriers to progress. In 1896 a respected statistician Frederick Ludwig Hoffman suggested those of African descent had “inferior vitality “because their vital capacity (VC) was found to be 6-12% smaller than Caucasian, this contributed to the belief that those of African descent had a higher mortality. However, his views were contested by other scientist who believed that other factors such as the social economic society (SES) and inequalities to health care access in that current time should have been considered for biological differences between ethnic groups. By 1990, the application of a correction factor (generally 6–12%) or the use of population-specific standards, both of which could be programmed into the spirometer, were commonplace in pulmonary training programmes in the USA and this practice of the correction factor was used widely across Europe, although there was no major supporting evidence of a smaller VC in those of African descent.

Explanation for the differences between ethnicities

Numerous reports have documented ethnic differences in lung volumes. It is recognized that there are distinct observable differences in lung function depending upon where you live in the world. However, in respiratory medicine a lot of assumptions have been made about the underlying cause for the observed differences between populations. The ethnic differences in lung function arise from differences in body build (such as chest size or the ratio of sitting to standing height), early life bodily development, environmental factors e.g., growing up at altitude. As well as genetic or ancestral differences, there are social and structural determinants of the differences observed between populations that factor into interpreting lung function. It has long been acknowledged environmental and social determinants impact the growth and development of the lungs, this can begin from early childhood. There is evidence of social and environmental factors having an impact across multiple generations.  A biological perspective is that evolution has given rise to the origin of mammals of widely different size. Each species is equipped with a scalable design of lungs; as it is scalable it fits small and large animals, and airways which meet the organism’s metabolic demands. Therefore, this can explain differences within human lungs. During this process of evolution changes occurred in phenotype, giving rise to populations that differ slightly in body build and dimensions. Also, an increase in the proportion of mixed-race persons will gradually blur race/ethnic distinctions.

Reference equations are available for a wide range of populations and even for subpopulations within countries. In fact, there are >400 published equations for spirometry alone.  Differences between equations arise from factors such as how healthy subjects were selected (with respect to exclusion criteria, age range, ethnicity, and sex), the number of subjects included (sample size), equipment, testing protocols, quality control and, very importantly, the statistical approach used to derive the equations. These differences can have a major effect on how lung function results are interpreted, with results from the same subject being abnormal using one equation while falling within the normal range in another. Previously the use of the European Community for Steel and Coal (ECCS) equations produced in 1983, were recommended for use within Europe. The ECCS working party performed a literature review using data from the previous three decades, from which mean regression reference equations were created. The ECCS reference equations were derived from white European adult males aged between 25 – 70 years working in coal mines and steel works. There were no females included and values for female adults were approximately 80% of that for a male of similar age and height with regards to ethnicity the race correction was used. For those older than 70 results were extrapolated (estimated) from the regression equations. 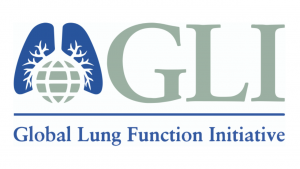 In 2012 The GLI Network aimed to pool and collate as much of the existing available spirometry data from healthy individuals around the world to derive all-age, multi-ethnic reference equations. The GLI Network was largely based on collaboration, altruism, and a common goal: to improve how lung function is interpreted. Reference equations were derived for healthy individuals aged 3–95 years for several ethnic groups including Caucasians (i.e., white subjects of European descent, n=57 395), African Americans (n=3545), and North(n=4992) and Southeast Asians (n=8255), where North Asian refers to Korea and China north of the Huaibei River and Qinling Mountains, and Southeast Asian refers to Thailand, Taiwan and China (including Hong Kong) south of the Huaihe River and Qinling Mountains. The availability of a large number of spirometry records from 3–95-year-old subjects of different ethnic backgrounds allowed the Global Lung Function Initiative to look into ethnic differences in greater depth. In addition, since many individuals were either not represented by these four groups or were of mixed ethnic origin, a composite equation was derived as the average of available data to facilitate interpretation in such individuals until a more appropriate solution is developed with appropriate data. This is the first study to present spirometry prediction equations spanning ages 3–95 years for ethnic and geographic groups from 26 countries. 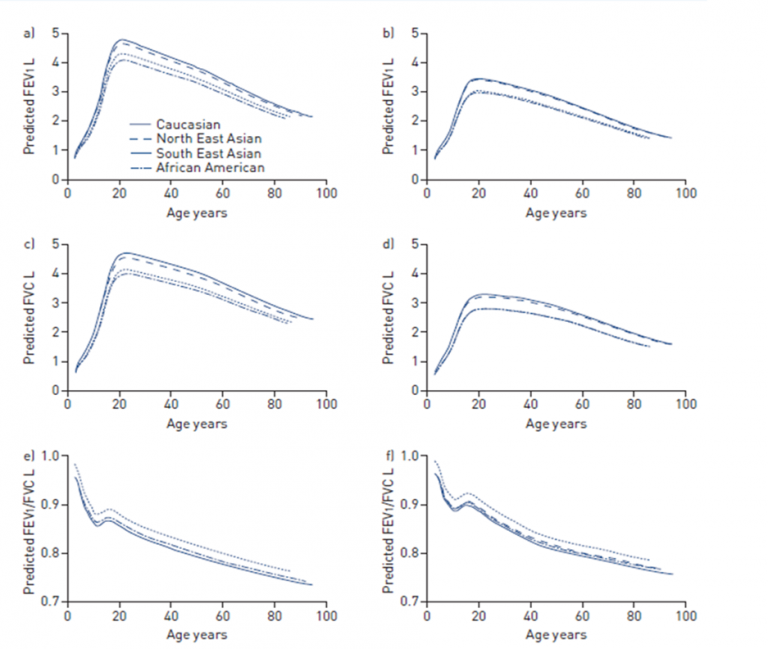 Predicted values for a, b) FEV1, c, d) FVC and e, f) FEV1/FVC by sex and ethnic group. a, c, e) Males and b, d, f) females. Graphs were generated using mean height for age in Caucasians to illustrate proportional differences between ethnic groups of the same height and age; in practice, differences in height for age further affect predicted values. The rise and fall in FEV1/FVC around adolescence are due to differential changes in FEV1 and FVC. 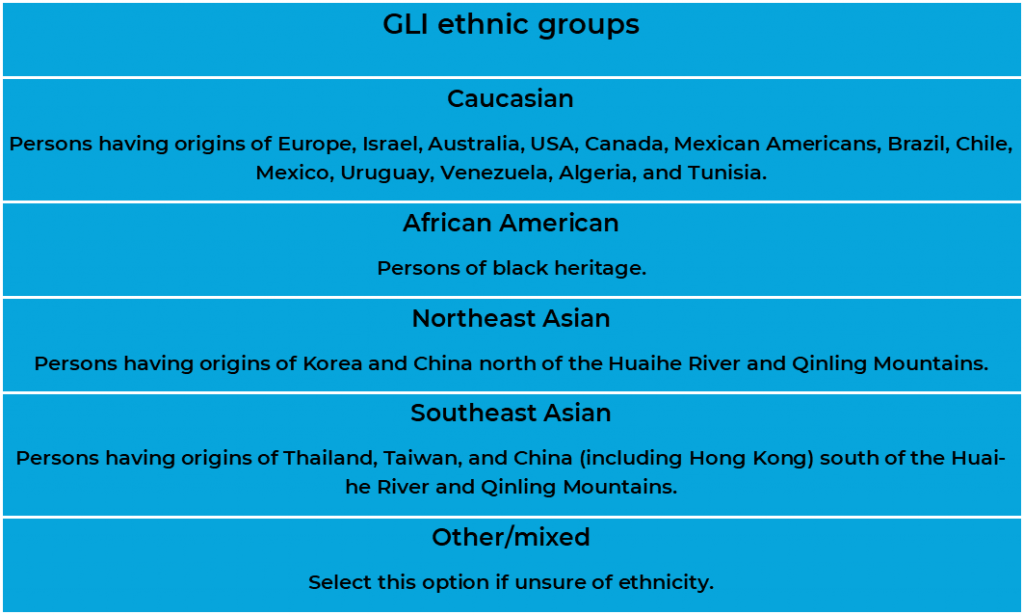 The GLI spirometry predicted equation sets, which have been available for nearly a decade now, represent a significant step forward in the accurate interpretation of lung function in every ethnic group. The previously used equations, although the best available at the time, are deeply flawed and lead to misinterpretation, misdiagnosis and potentially life changing decisions.

When using the GLI equations you should choose the ethnic group that is most appropriate to the individual you are testing. Although ethnicity should be a consideration it is a slippery concept and frequently your subject won’t fit neatly into any specific group.

When assessing lung function in an individual not represented by one of the four main groups it is recommended that the group called ‘Other/mixed’ is used. Individuals in this group are compared to the average of the four main ethnic groups.

GLI manages ethnicity much more accurately, though there is still plenty of work to do on this. Additional data from the Indian subcontinent and Arabic, Polynesian and Latin American countries, as well as Africa will further improve these equations in the future. With ongoing data collection, it is hoped that the majority of “missing groups” will be included within the next 5 yrs. Provided a sufficiently large and representative dataset is collected using standardised protocols, it should be possible to derive suitable ethnic coefficients for specific groups without re-calculating the GLI equations.